What a week I’m having! If 2017 has been as full of angst for you as it has been for most of us, you’ll enjoy the suggestions in my December Enews. This issue features a nod to laughter, seasonal donation opportunity, help from a fellow blogger, favorite product tip and a first time offer for 30% OFF A Clear Place Wisdom Cards. Here’s to lightening the load with humor … and a bright holiday for all! View the good stuff now. 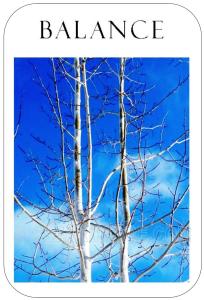 Staying in balance is something we all strive for but it can seem a difficult and elusive task. It’s especially tough when weighed down by physical, emotional and mental STUFF! The latest ACP Enews shares some favorite ideas on how to get back to center. You’ll get a great breathing tool for releasing stress, read about a win/win “letting go of stuff” story and learn my top item to eliminate in your home in order to maintain balance. PLUS enter to win a deck of ACP Wisdom Cards for you or a friend. Just taking a few moments to view the stunning sunset image will help create a positive shift.  Make 2017 the year to share the cheer and spread the clear! Read January ACP Enews here.

It’s here! A Clear Place September Enews. Meet my feisty 86 yr. old friend and learn how she’s still making a difference; get an update and helpful recycling link from Earth911; get a quick tip on organizing your clearing and download a FREE sorting guide. And, in honor of Autumn – the season of letting go – get FREE shipping on ACP Wisdom Cards. All this and more. Happy Fall and happy clearing! View Enews now.

Learn about the queen of spices and how you can support efforts by Heifer Intl to raise its farmers out of poverty; peek inside a $20k home designed by Rural Studio; get an online tool that helps you determine the dollar value of your stuff; listen to my top picks for music guaranteed to put a wiggle in your clearing out tasks … and more. View Clear Ways to A Better World – February 2016. Enjoy!

Challenge: Find a better way to present multiple topics, links and graphics on one page that all open easily with mobile devices. It needs to look good and inspire action. Oh … it should also have a personal vibe and consistent quality. Something that’s professional yet warm and, of course, always clear in voice and message.  Result: Today I launch my latest Clear News format … thanks to MailChimp and lots of pots of jasmine tea. Hope you enjoy it!

Not on the ACP mail list? Send me your email address to get the monthly ACP Clear News delivered directly to your inbox. Addresses are never shared or used for promotion.

NEW!  Clear Place Greeting Cards to compliment the ACP Wisdom Card deck.
Get TWO Clear Place Greeting Cards FREE with each deck of ACP Wisdom Cards. Give the deck that makes a difference!
Good To Know: It mattered to me that the printing process reflected the message of mindful living. Both the deck and the box are printed in the USA and with 100% wind power.What better way to showcase the natural beauty that I so loved capturing with the camera?

Enjoy & thank you for your efforts in keeping the earth a clear place!

The media is especially full right now of disasters both man made and natural. As we head into Fall and the season of letting go; I like this reminder from Astrologer and teacher, David Pond:

Periodically the background buzz of Armageddon surfaces and these times are no exception with an inordinate number of people asking about their astrology and the coming collapse, disaster, “Armageddon”, they have been hearing about. A crisis of this magnitude is not anything I am picking up on my radar, but I would like to close with the story I remember of Ram Dass’s response to the question of did he see a coming Armageddon. The quote is from my memory of his reply:

Letting go and detaching from the outcome takes practice. But as with most worthwhile endeavors, the more you do it … the better you will feel in body, mind and spirit. Learn more about this month’s Focus Card and this featured place in nature. One of my favorite vistas and photos! See it up close.

ACP Deck the halls! I’m celebrating the season with FREE earth friendly gift wrap for all holiday orders. So just what makes these ACP Wisdom Cards so special?  Click here to find out why these decks are the perfect way to gift green!

Being grateful transforms our feelings of despair to ones of hope. We can go from a perspective of burden to bliss in an instant. This season of giving thanks seemed the perfect time to share my backyard alchemy experience – yet another example of the transforming magic of nature. We need only to still our busy-ness and observe the gifts around us to feel blessed. View more.

A Clear Place
Powered by WordPress.com.